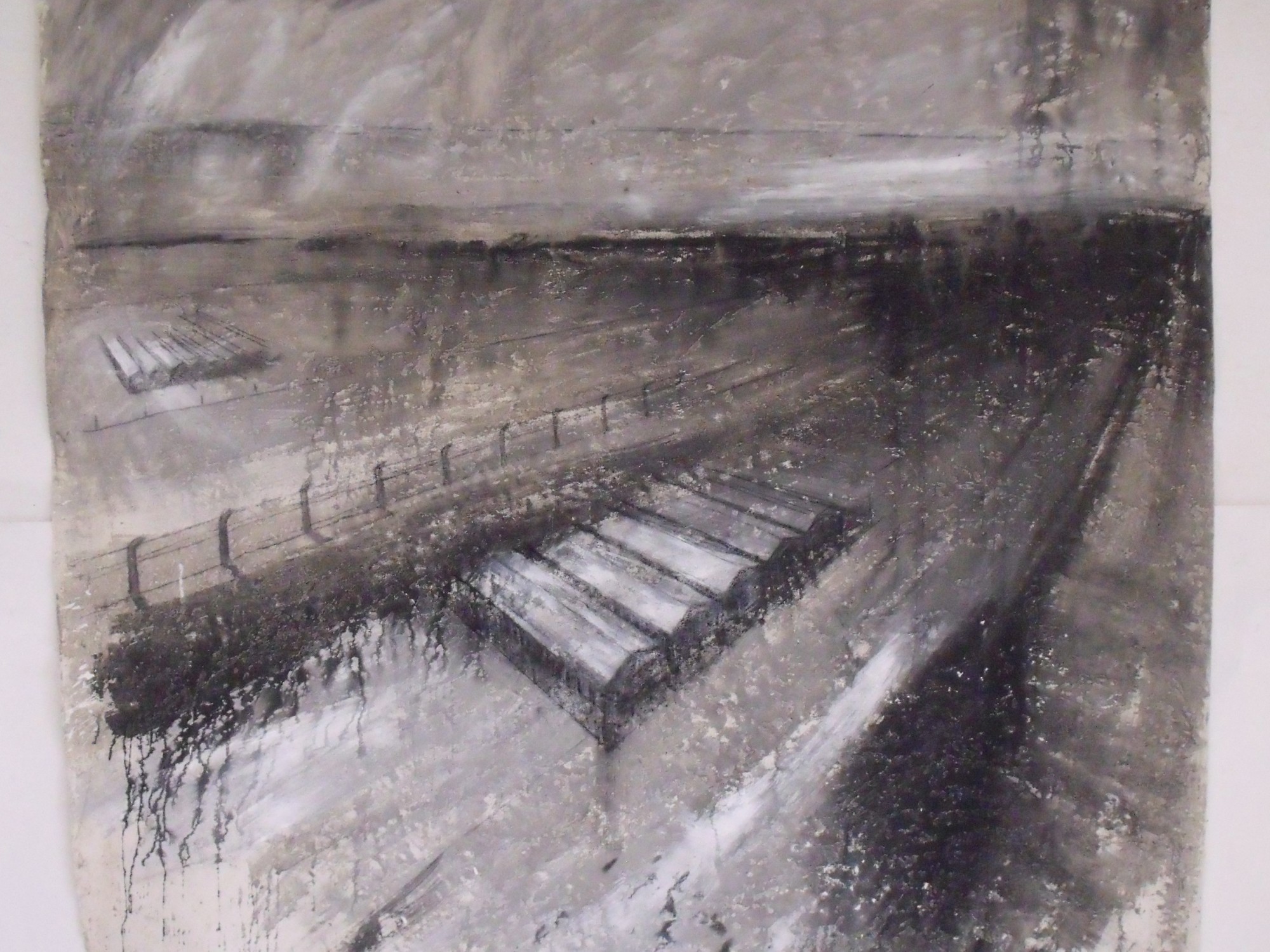 On the 31st March 1944 an aerial photograph of the Auschwitz-Birkenau extermination camp was taken by the 60 Photo-reconnaissance Squadron of the South African Air Force for bombing intelligence purposes. The photo – reconnaissance ‘Mosquito’ plane was actually looking for the nearby Farben war production factory and to ensure complete coverage of the target it was common practice to start the camera rolling ahead of time and stop it slightly after time. On one photo one can identify several railway transports next to a ramp, groups of inmates, and smoke billowing from the chimney of Crematorium 5 indicating that victims had just been exterminated in the gas chamber beneath. The photo material was shared with the U.S. 15th Air Force which later bombed the factory but failed to recognise the significance of the Birkenau photograph. Although the allies were aware of the existence of concentration camps within the Third Reich the unspeakable reality of mass extermination camps such as Auschwitz-Birkenau was beyond their imagination and the result was a blindness to reality which was only exposed some 8 months later with the discovery and liberation of the camp by the Red Army.

I was born in England in 1948 and grew up in the generation born after the Holocaust. We were told and had no reason to doubt that never again in Europe would such evil be perpetrated again. The moral conscience and collective guilt of the continent would make sure of that. In the early 1990’s when the term ‘ethnic cleansing’ was introduced to the world in the Balkans and the first images of starving inmates staring through barb wire enclosures began to appear in the press I was shocked and angered but fully expected a thorough and collective response from all the powerful European states to obliterate the cancer. As the months rolled into years and the conflict escalated and stories and images of the mass rape of Muslim women, the systematic destruction of their homes and the mass killing of their men became common place on our television screens and in our press and still nothing was being done my initial mood of anger turned first to outrage and then into a deep sense of shame. Overriding this was the awareness of being let down by the very forces that promised me it would never again happen in Europe. As airliners full of tourists on their way to the Aegean flew past enclaves of genocide such as Srebrenica Europe’s shame increased. It no longer had the excuse of not knowing.

Extract from my address to MEPs at the opening of my exhibition ‘Srebrenica : Paintings from the Grave’ held in The European Parliament Building Brussels in September 2006.

Place of the Missing

When you approach these sites there’s a kind of disbelief. Surely the carrion birds are there for reasons such as following the plough. But there is no plough and the fields have not been tilled for a long time…and then the reality hits you like a sledgehammer and the sheltering silence of the place is shattered. You scream inwardly and the birds rise into the sky, a huge flock shrieking and cawing pulsating around you.

We approached this tiny destroyed Bosniak village in Eastern Bosnia wondering what to expect. Quite honestly it could have been any village – Lebanon, Syria, Poland, Belarus, France, Greece, Russia, Spain and so on in the last one hundred years….

Extracts from my diary ‘Places of Mourning in the Western World’.